meaning there is too much money circulating. The article is gated AND in German. I have not paid, I mean, come on. The occasion is of course the recent ruling of the German Constitutional Court about the ECB’s QE.

Back to his concern that too much money is circulating and this being HWS, he sees the ECB as being the culprit and its policy of no-holds-barred which could lead to “die Gefahr, dass europäische Länder in der Krise pleitegehen” (the danger that European countries go bankrupt).

Incidentally, The General Theorist has a post from yesterday “Three Unique Roles of the Bundesbank within the Eurosystem“.

All national central banks (NCBs) within the Eurosystem are equal. But one is substantially more equal than the rest.

Indeed, Deutsche Bundesbank (Buba) plays at least three unique roles in the structure and evolution of the Eurosystem: (i) in the creation of currency in circulation—that is, physical euro cash-in-hand; (ii) as reservoir for surplus claims of non-euroarea reserve managers—that is, as a substitute for Bunds when global safe assets run short; and (iii) as final destination, particularly in periods of stress, for excess liquidity created across the euroarea.

Having said that, TGT points to the salient fact that the Buba has increased the amount of euro cash over the years quite substantially compared to the Rest of the Euroarea (ROEA).

Figure 1 below shows CIC issued by both Germany and Rest of the Euroarea (ROEA) in levels terms (left) and as year-on-year growth (right.) The stock of CIC emitted by Buba has increased from below EUR400bn end-2010 to approach EUR800bn today; in contrast, ROEA has seen currency emitted increase less than EUR100bn over the same period. In terms of growth, except for a time in 2015 when ECB initiated a negative deposit rate policy and asset purchases, CIC growth across ROEA has been around 0%YoY. In Germany, CIC grows consistently around 8%YoY. Since the COVID-19 Crisis, of course, there has been another flight to currency.

More precisely, since end-2014, the Eurosystem in aggregate has created EUR310 billion in banknotes for circulation as “cash in hand”—carried in wallets, stashed under mattresses, hidden within sofas. Of these (net) new banknotes created, Buba has created EUR270 billion. That is, nine out of every ten new physicaleuros created over the past 5 years originate with the Bundesbank. 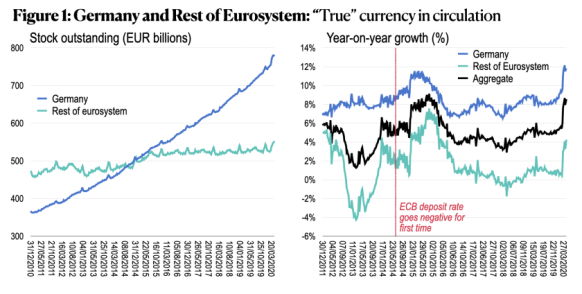 Taking a longer perspective, on January 1st, 1999 there were EUR342bn euros in cash on the Eurosystem balance sheet as then constituted—of which EUR131bn (38%) were due to Buba. As of May 1st, CIC was EUR1,334bn with EUR782bn (59%) from Germany. Thus, more than half new euro banknotes since inception originated with the Bundesbank, which contrasts with her capital key of about ¼.

Read the whole at TGT.